Keep your friends close, but keep your enemies closer. I’m not a fan of quoting cliches, but in these Machiavellian times, few phrases seem to articulate the situation better. Take the case of the recent media campaign praising Saad Hariri, Lebanon’s recently resigned prime minister.

Now it’s very normal to see posters praising politicians hastily strung up on light posts across Beirut. As you would expect, these are usually produced by a PR company or low budget design shop associated with the politician in question and hung up haphazardly by his supporters, illegally, often under the cover of night.

But what if the group putting up the billboards is not loyal to the politician in question, but actually allied with his enemies?

I began to wonder about this when I saw a Facebook post revealing Hariri billboards in or around neighborhoods loyal to his rivals, Hezbollah and Amal.

The next day on my way to work, I noticed more of the same posters with the same font and message “#We are with you” plastered across many parts of Beirut. 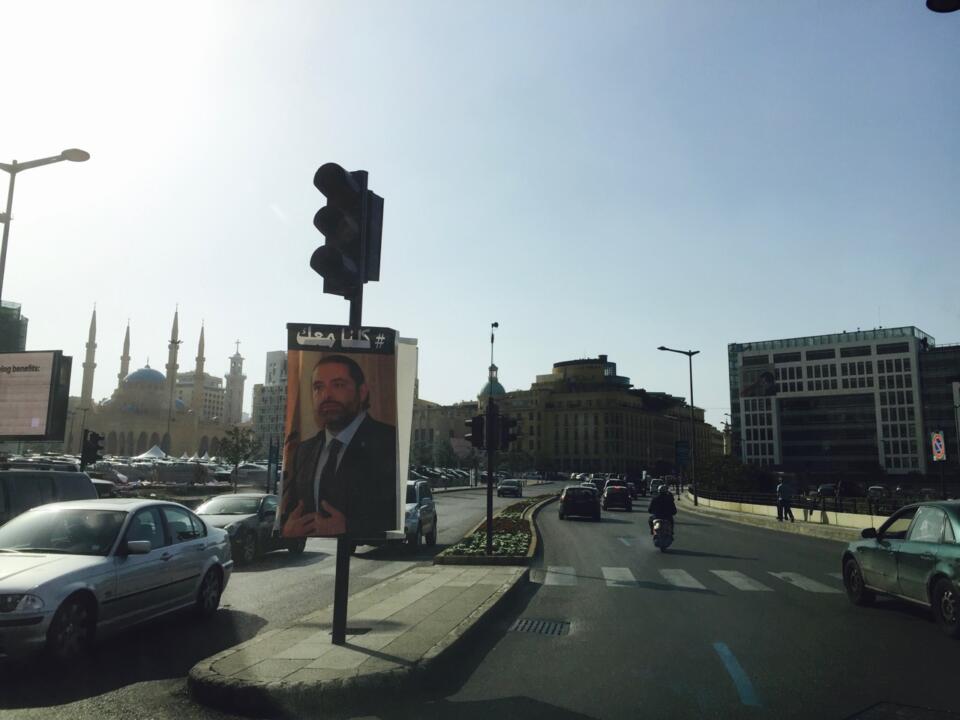 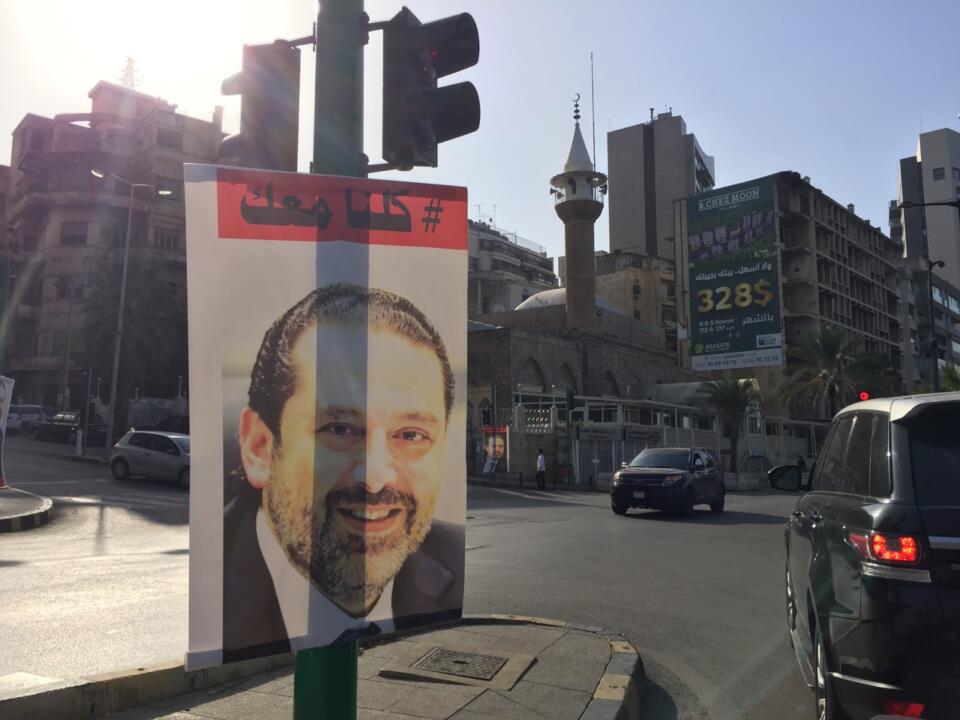 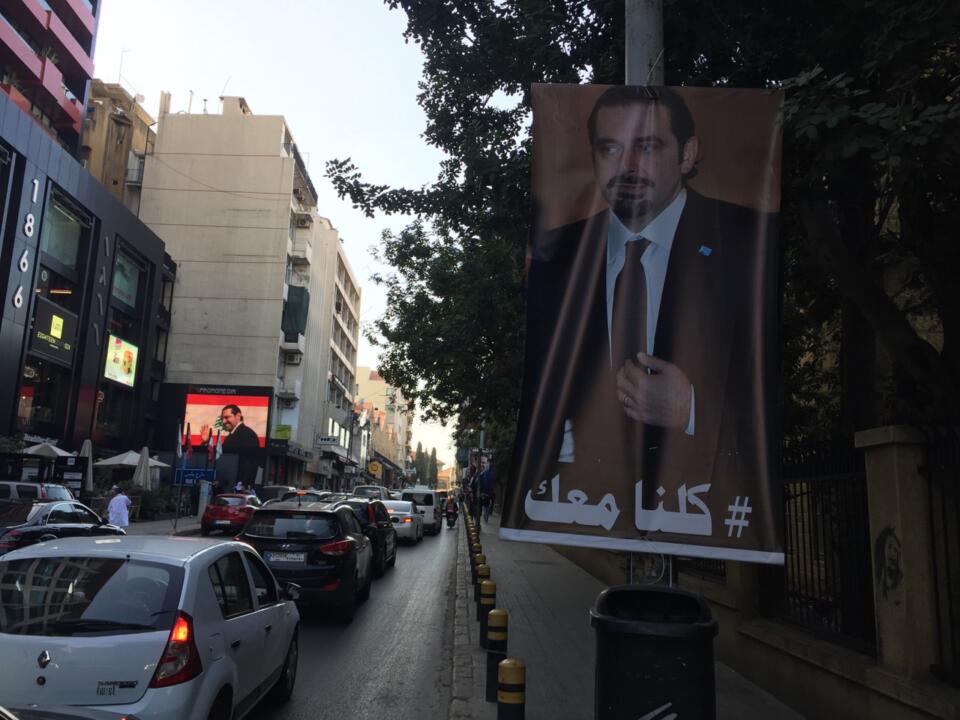 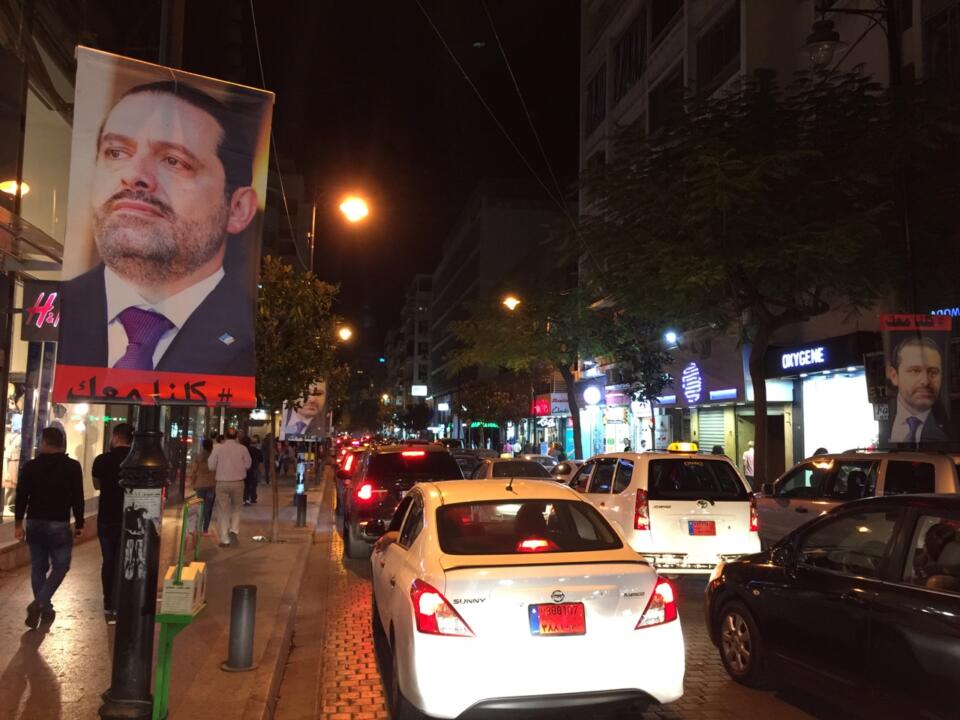 On nearly every light post, as far as the eye could see: 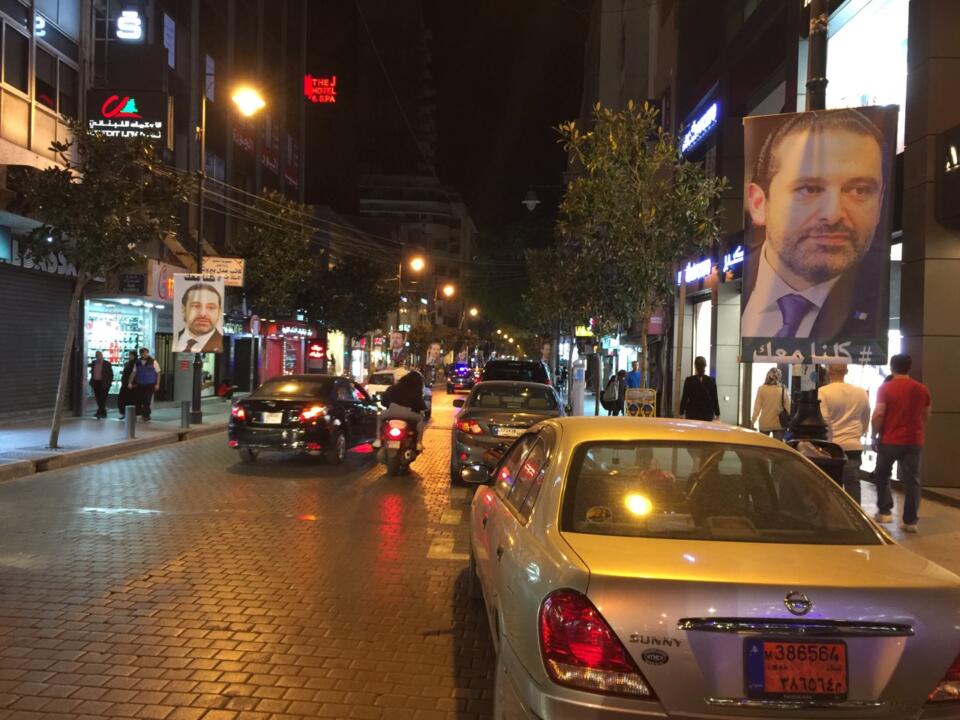 Yet the last few locations are not known to be strongholds of Hariri, but of other parties such as Amal and the SSNP. This was made abundantly clear during the clashes of 2008, when militants from these parties took over the streets fairly easily and strung their flags across these locations.

In the decade since, SSNP flags have appeared regularly across Hamra street and the party’s annual march turned into a military-style parade a few weeks ago that saw hundreds of party faithful take over the entire of Hamra street:

I thought about all this when I looked up at one of the posters, which had been put up so shoddily, it appeared to give Hariri a grimacing look: 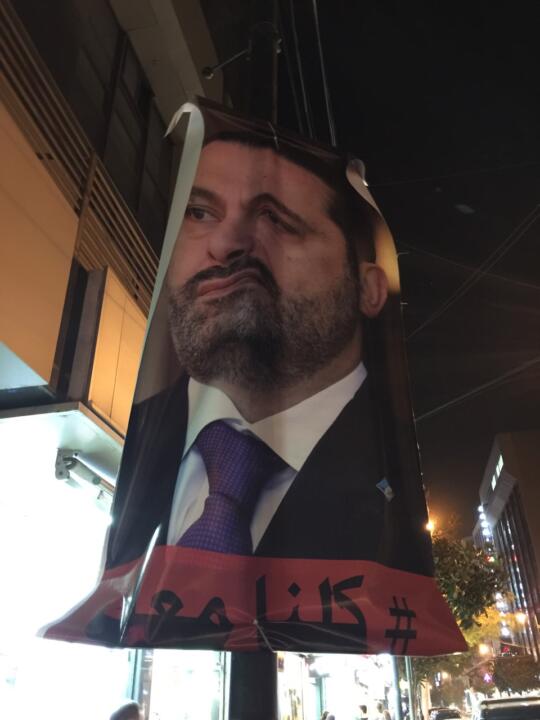 I asked some tough-looking middle aged men sitting in plastic chairs below the posters if they knew who had put them up. At first one of them, a burly man in his late 40s, answered by saying “the Lebanese people put these posters up” and “it’s natural for a people to support their prime minister.”  Sure, I replied,  there is public support and then there are printing companies that print hundreds of these and distribute them in trucks. He smiled and vaguely suggested it was “political parties… all the parties,” that worked together to install the posters in their respective neighborhoods.

But I pressed him further: “But only certain parties can do that in Hamra.” Finally he conceded. “Yes we are the ones who put those up. The Hezb, the Harake and the Oumi Souryi.” This is shorthand for Hezbollah, Amal and the SSNP.

That’s a pretty savvy, next-level media strategy isn’t it, I replied. “Well the Saudis are donkeys,” he said nonchalantly.

“And what about this one,” I continued, pointing to the grimacing Hariri. What happened there? The man motioned to one of his cohort sitting in a chair behind us. “That’s Ali’s fault, I told him to fix it, he didn’t know what he was doing.” Then Ali shrugged and shot back: “You didn’t give me enough wood to put it up properly.”

I left the bickering men and tried to corroborate the story elsewhere on the block. But most people said they had not seen who had put the posters up because they found them in the morning when they opened their shops. So apparently the operation had happened overnight. But another group of men admitted laughingly that it was indeed the “Hezb, Harake and Oumi.” And they thought it was pretty hilarious too.

If this is true, could the Saudis have ever imagined this outcome? Were they assuming that Hariri’s resignation would have been taken at face value and that his opponents would have simply said good riddance, creating greater division in the country? Could the Saudis have imagined that Hariri’s opponents would be demanding his return even more vociferously than his allies?

Of course this goes beyond billboards: the President of Lebanon and the leader of Hezbollah-traditional opponents of Hariri–have been demanding his return on a near daily basis.  Even the leader of the Catholic church in Lebanon, Cardinal Bechara Rai has demanded his return, making an unprecedented visit to the Wahhabist state.

This spawned some interesting memes. Here the two are speaking in code: 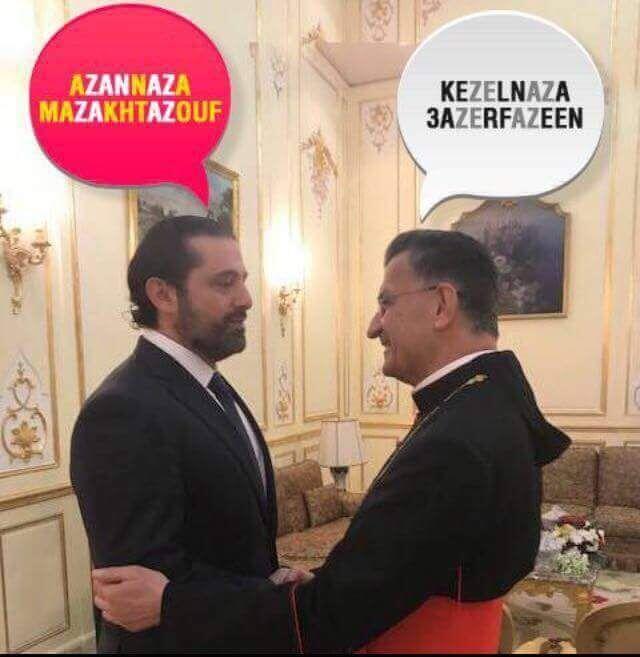 The highlighted letters in the Hariri caption say: “I’m being detained” to which Rai replies: “We all know.”

Perhaps the Saudis had imagined the Lebanese would react in a simplistic “sectarian fashion” where politicians or crown princes prioritize their own sect above all others. I wonder where they got that idea?

Suffice to say, Hariri’s opponents and even internet trolls have successfully thrown the ball back into Saudi Arabia’s court and the Saudi leadership probably didn’t see this coming. But since the Saudi royal court (or whatever is left of it) has effectively declared that Lebanon is at war with them, we can only hope the disintegration of their media strategy will give them pause before pursuing further actions on the ground.

Wouldn’t it be great if all wars were limited to creative media messaging, and the winner could be decided with likes and retweets instead of missiles and bullets? 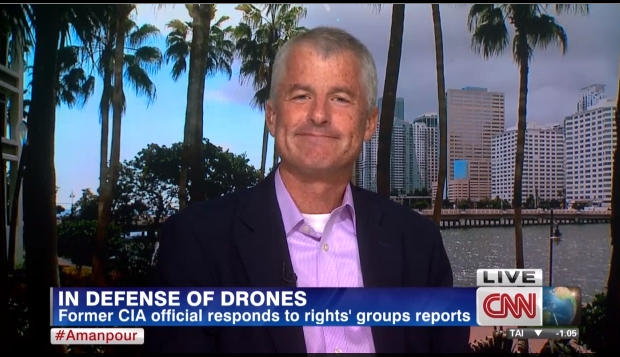 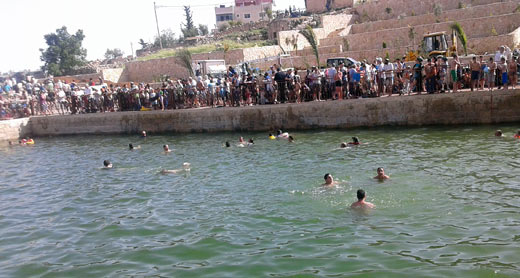 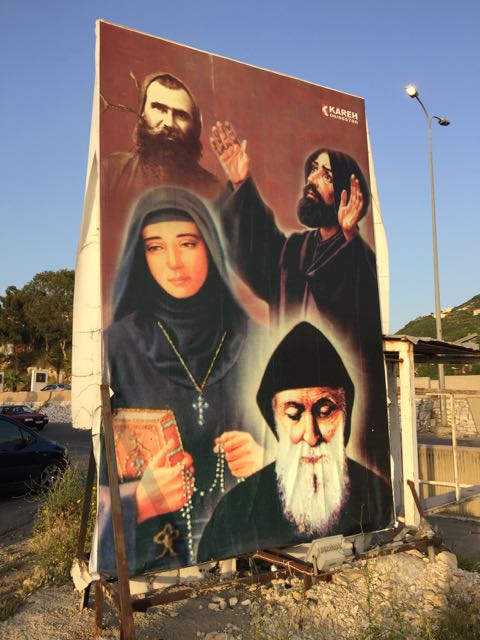 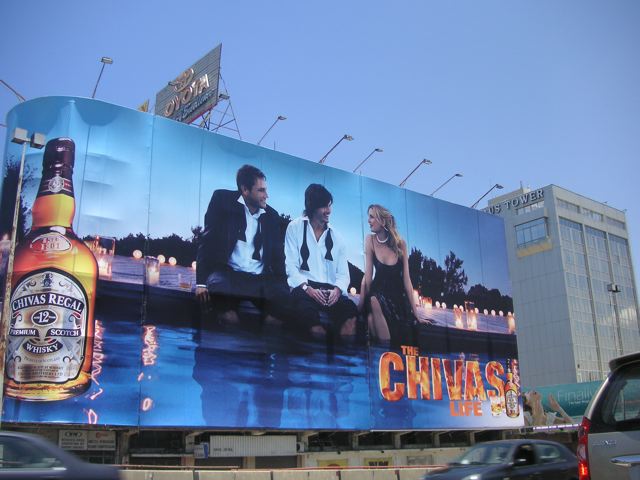 Read More
MMedia
A new air of optimism prevails in Lebanon today. And as is often the case after a Lebanese… 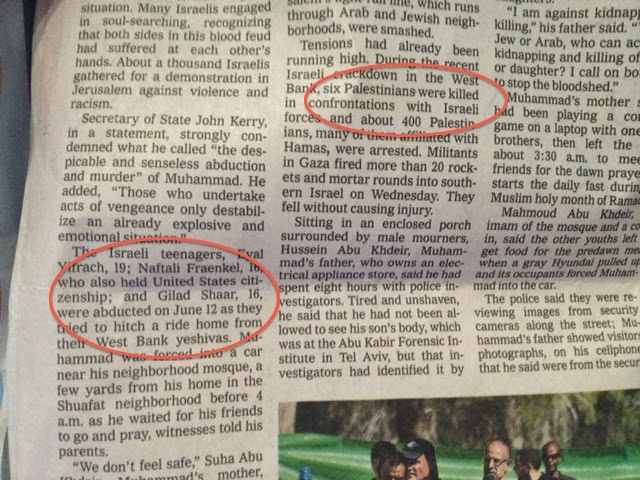